THE SPLC COMPOUND that sits on Washington Avenue in Montgomery, Alabama, is one of the ugliest buildings I’ve ever seen. It’s a cultural Bolshevist “postmodern” horror of disharmonious angles that looks like a cross between a junked 386 computer and a prison. It’s a perfect place from which to make America itself an ideological prison, which is pretty much the mission of the Jewish group that styles itself the SPLC or “Southern Poverty Law Center.”

END_OF_DOCUMENT_TOKEN_TO_BE_REPLACED

TODAY WE ARE presenting the third and concluding part of my second interview on Resolution Radio with host Sonny Thomas. In the show we talk, among other topics, about the ability of the Jewish power structure — and the controlled media they own and operate — to insert a weirdly distorted picture of reality into the consciousness of so many of our people, the consequences this can have for our future, and some of the ways we can break free. We ran well over the time allotted for the show, so this recording has been edited for broadcast.

Some of the topics we cover are:

END_OF_DOCUMENT_TOKEN_TO_BE_REPLACED

THIS WEEK we bring you part two of my second interview on Resolution Radio with host Sonny Thomas. In the show we talk about the de-platforming and censorship of racially conscious Whites by the Jewish power structure, about the Anti-Defamation League and their connections to mobsters and killers — and the US government, and many other topics. We ran well over the time allotted for the show, so this recording has been edited for broadcast.

Some of the issues we cover are:

END_OF_DOCUMENT_TOKEN_TO_BE_REPLACED 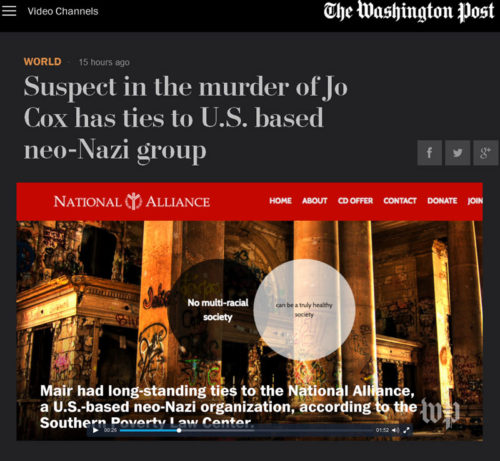 YESTERDAY the Inbox of the National Alliance was overflowing with media inquiries. The reason? A woman named Jo Cox, a Labour Party Member of the British Parliament, had been murdered the day before on the streets of Britain, and Thomas Mair, the man arrested for the crime, was, within hours, being “linked” to the National Alliance by the Jewish-run SPLC or so-called “Southern Poverty Law Center” in Alabama. (ILLUSTRATION: A screen shot of the main video page of the Washington Post, showing an image of the National Alliance Web site and the Post‘s regurgitation of SPLC propaganda; the Post, like many other media outlets, made no attempt to get the Alliance’s point of view and made no acknowledgement of or reference to our press release below, which was provided to them more a day before.)