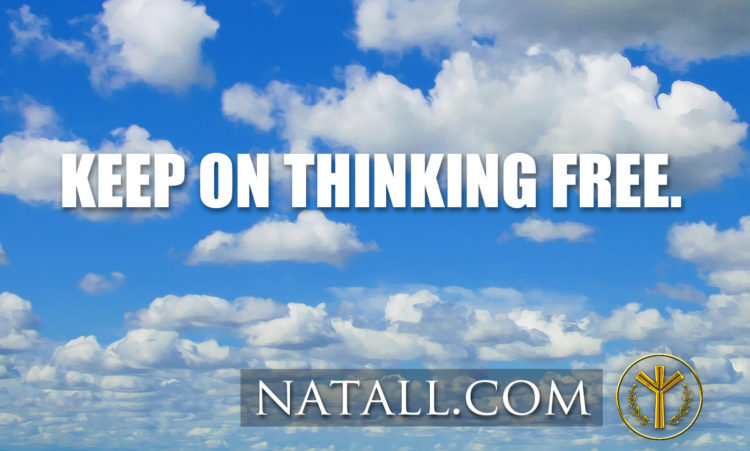 ONCE someone asked me what my purpose in life was. I answered, somewhat flippantly, that it was my lifetime duty to show White people that almost everything they have been taught for their entire lives is the opposite of true and the opposite of moral — especially those things that they were told were sacred and holy. Perhaps that was a slight exaggeration. But it is true that we Whites are being attacked by an enemy whose main weapons are deceit and trickery. We have absorbed so many deliberately implanted delusions that we lie crippled on a battlefield where we could be easily victorious. Let’s crush some of those delusions today.

Delusion A: Racial mixing is the inevitable trend of the future and of Nature.

END_OF_DOCUMENT_TOKEN_TO_BE_REPLACED

CRAZY PEOPLE say some really funny things, if you like absurd humor. A crazy person may believe that locomotives are actually made out of marshmallows. Or he may think that the only reason we can’t drink bleach without harmful effects is because we haven’t prayed to the right deity in precisely the right manner. And some lunatics are quite intelligent in their way, and may be able to produce creative and internally consistent arguments at some length to justify their positions, even if their premises are quite nutty. And all that’s good for a laugh.

For example, one Flat Earth believer insisted that the Earth was two-dimensional and shaped like a plate. And he could even explain how, on this plate-shaped Earth, people could apparently travel in a straight line and eventually end up back at their starting point. “They simply fall off the edge,” he said, “and since the Earth is two-dimensional with no thickness whatsoever, they ‘fall’ into an area comprising no space at all and reappear instantly on the opposite side of the plate to resume their straight-line journey back to their starting point.”

END_OF_DOCUMENT_TOKEN_TO_BE_REPLACED

AMERICA IS FALLING to the invaders before our eyes. Our borders are open, and a large faction of an ostensibly conservative party wants to open them even further. So do their opponents. Our women and children are increasingly raped, beaten, and killed by non-White gangs, demographic trends forecast the doom of our race, our soldiers have become nothing but enforcers for a criminal foreign state — and yet the people blithely play their ball games, work at making more and better widgets and burgers, listen to the soothing words of the preachers and the newscasters, and generally carry on as if death was not about to tap them and their children on the shoulder.