American Dissident Voices broadcast of December 29, 2018 (the 27th anniversary of our show)

I DON’T KNOW who made it, but there’s a great graphic (that looks like a panel from a comic book) that’s been making the rounds of the intelligent part of the Internet. A man stares forward, his brow knitted in thought. Someone has asked him a question: “If a majority voted for you to jump off a bridge — would you?” And he answers, “Maybe — if it was a fair vote!”

That bridge is the invasion, multiculturalization, and takeover of our living space all over the West. Jumping off that bridge leads into the black, fetid water of extinction for our people. And, really, who voted for this anyway? For decade upon decade, huge majorities of White Americans — and even Blacks in America! — have been dead set against the immigration invasion. Yet, ever since the borders were opened in 1965 by liars who said we were “just being fair to families” and that “no great change” in American demographics would occur, decisions have been made by the government that directly contradict the clearly expressed will of the majority. So even the pretended “democracy” is a sham, anyway, even if you believed it was a good thing “in theory” — which it isn’t.

Keeping our borders closed to aliens and enemies is obviously the right thing to do. But is keeping our borders closed to everyone except our fellow Europeans the right policy, the right thing to do, because it was the opinion of the majority when the latest poll was taken? If the majority had preferred a different policy — say a policy of mandatory racial mixture, or a policy of letting the Chinese run our government for their benefit — should we have followed that policy instead, because the majority wanted it?

Absurd. The right path forward for our people — for any people, actually — is the path that guarantees survival and advancement. Allowing the immigration of racial aliens shouldn’t even be considered; shouldn’t even be on the list of things to think about, much less vote about. And allowing a hostile and aggressive gang of enemy aliens to control our mass media is also something that was never put up for a vote — but we have it anyway. It’s something that should never be allowed; something that should be put on our never do and it’s criminal to do this lists.

One way they snooker us is through package deals. If you want a fair deal for the working man, and if you want government as a counterforce against the super-rich, then you have to accept the package deal represented by the Democratic party — you have to accept the promotion of homosexual sodomy and 14,000 genders, the huge and ever-growing subsidy of the underclass, total and abject slavery to the state of Israel and involvement in her proxy wars, and, worst of all, the mass invasion of America by non-White cheap labor.

If on the other hand you’d like to cut back the underclass subsidy and want some support for the natural and traditional family unit instead of for perverts, then you have to accept the package deal represented by the Republican party — you have to accept rapacious Wall Street vultures running the Treasury, massive damage to the natural environment, — oh, and you also must accept total and abject slavery to the state of Israel and involvement in her proxy wars, and, once again, you must accept the mass invasion of America by non-White cheap labor (which big business Republicans dearly love). Seems like all the package deals we are offered include the things that people like Sheldon Adelson and George Soros agree on and insist on, and we have no choice, really. Gosh, maybe, just maybe, this system was designed to give us only the illusion of free choice — maybe the system we have now was designed to make sure that the billionaire Jewish oligarchs always get their way on the issues they really care about.

But doesn’t democracy protect us from evil dictators? Well, I acknowledge that having some means to remove an incompetent or odious or tyrannical or otherwise intolerable leader is necessary, and having his own praetorian guard murder him isn’t a very good succession plan. But we can have a council of elders, its members raised from birth in proper ethics and racial principles, and carefully winnowed and proved to be of the highest ability and character, who can, in consultation with the best among our people, make such decisions and changes. You could even call such a system a kind of “democracy” if you wanted to, but why take on the name of the rotten system you’re trying to replace? Confusing!

(Being against Democracy does not mean you’re against the common man. The common man needs good leadership — exactly what Democracy can’t give him.) I know that every person has a story, and every person struggles, and that most of us are decent, are trying to be good — and deserve fairness and kindness and honesty and good government, and support when needed. The people deserve and need good leadership and good government. They don’t deserve tyranny. But that is not, I repeat not, an argument for one-biped, one-vote Democracy.

The truth is that most people are easily manipulable. Some are too dumb to understand anything more complex than “hate bad, love good” — some are easy prey for any halfway well-scripted mass media appeal to emotion — some are just too busy working and raising children and paying debt interest to take anything more than a momentary, cursory interest in what is really happening to our world. Such people are never going to seriously question whatever narrative is fed to them by the billionaire Jewish media moguls, who run both the “liberal”- and “conservative”-leaning media. Added together with our resident 80-IQ brown people, the easily-manipulated blankos dominate every election, and that gives those who do the manipulating, that is, those who own the media, the decisive power in almost every election, and therefore in our society and in the world. No wonder the oligarchs are constantly pimping for our kids to die in wars to establish “democracy” around the globe. They want the same lock on political power that they have here extended to every country that still looks like it might get a tad rebellious.

The great god Democracy, where the real power lies with the money-men and the media-men: But their power is hidden from the majority, who wrongly believe that the politicians they vote for or against have real power and make the big decisions — not knowing that these disposable and blackmailable candidates are owned and set up and guided by the oligarchs for their entire careers. By such means, the oligarchs avoid responsibility for their crimes. Some of us have come to believe that it’s better to know who is leading our nation, and hold them to account, than to live in a world of illusions. The cattle on the way to something worse than a slaughterhouse think that they’re free as long as the smiling face on the TV tells them they are.

Think on what Victor Hugo said: “What is wonderful about universal suffrage is that it nips riot in the bud and, by giving the vote to insurrection, disarms it. ” Democracy, Hugo is telling us, makes us do nothing except try to get a majority to support the changes we want in our society. I’ve seen this mindset thousands of times, even among the racially-aware: wild enthusiasm when a popular figure uses some rhetoric we like, or supports some policy that is one inch in the direction in which we need to move a thousand miles. Wild enthusiasm for Donald Trump, for example. And the cold shoulder — no help, no money, no promotion, no loyalty — to those who really do have a plan for securing a future for our infinitely precious race. They’ll say: “You can’t say those things. They’re too radical. A majority of the people — even a majority of pro-Whites — aren’t ready for them. You’ll scare off too many people. You can’t use that word. You need to cater to what people already believe if you want a majority to support you!”

Think on this too: Should we wait to do what is right until such time as 51 per cent. of the human population of the United States agree with us that it is right? And, if that time never comes, should we do nothing? Should we spend all our money and energy and the minutes of our lives trying to sell the blankos on some watered-down version of one-tenth of what we want that they might be able to barely comprehend (and support for all the wrong reasons)?  Or should we start doing what is right right now to the best of our ability? Should we not immediately and enthusiastically start working for the day when people with our radical, uncompromising racial-nationalist philosophy and Cosmotheist world view will hold all political power and retain it for ever? We know that only we deserve to lead our people away from the pit and toward the stars. We know also that our Folk will instinctively understand that our way is right — that our way is the only way — once they are shown.

And consider: Should we ever be deterred from doing what is right by majority opinion? — or by what we have been led to believe is the majority opinion by the world’s most skilled deceivers? 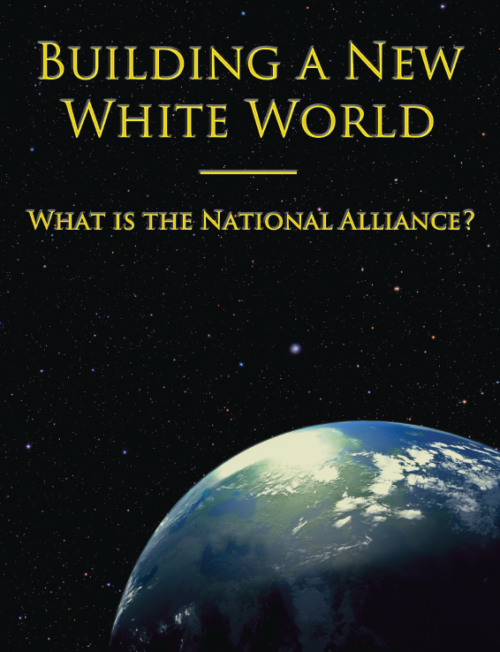 Are you a member of the minority — the decisive minority — who can see the reality of corrupt “democracy” for what it is? We are millions now. Millions are now Jew-wise and see the Jewish money-men and media-men as enemies. Millions are now ready for the answer: Racial-nationalism, racial socialism, and the principle that the best and strongest and most devoted men shall lead.

We millions need only organization and faith and unrelenting effort to take control of our own destiny. Are you a member of that decisive minority? — which Dr. William Pierce told us was really a majority — not a majority of numbers but, to use his words, a majority of will and determination.

Are you ready for the total social transformation embodied in our foundational document, Building a New White World?

Soon, if we do our duty well, our people will be ready for a new cosmic vision of the purpose of Life and of the European race.

I want to send every one of you who hears these worlds a beautiful, full-color, glossy magazine-style copy of Building a New White World. It details our plan and our vision for the future — and the only possible path to that future. It can change your life, and it is the most impressive piece we offer for recruiting that worthy man or worthy woman you know into our sacred cause. Building a New White World is available for $3 per copy from National Alliance, Box 4, Mountain City, TN 37683 USA.

You’ve been listening to American Dissident Voices, the radio program of the National Alliance. The National Alliance is working to educate White men and women around the world as to the nature of the reality we must face — and organizing our people to ensure our survival and advancement. We need your help to continue. Please send the largest contribution you can afford to National Alliance, Box 4, Mountain City, TN 37683 USA. You can also help us by visiting natall.com/donate. Once again, that address is Box 4, Mountain City, TN 37683 USA. Until next week, this is Kevin Alfred Strom reminding you to never give up.