We once had a talented volunteer editor who quit helping us, in part, because National Vanguard was too pro-Hitler. He told me that he winced every time we talked about Hitler in a positive way. And one of our more prolific commenters on National Vanguard, who goes by the amusing nom de guerre â€œTrayvon Martinberg,â€ went further in a recent comment of his:

Actions speak louder than words, and Hitler attacked and demeaned members of his own race, as a German chauvinist who just wrote of pan-Aryanism while looking away at Jewish blood possibly flowing in himself and others running the Reich. Bombing England and torpedoing her colonial cargo ships come to mind first. But how did he sidestep that pure Aryans existed in Russia and Poland, whose soldiers he starved when taken prisoner? . . . There is no need for Hitler references except to point out political correctnessâ€™s erroneous attributions to him. Hitler led Germany to ruin.

I have to stop there and say that thereâ€™s no credible evidence that Adolf Hitler had Jewish ancestry â€“ thatâ€™s just another slander devised by Jewish propagandists to demoralize good people â€“ people for whom Jewish ancestry in a White leader is a negative thing. 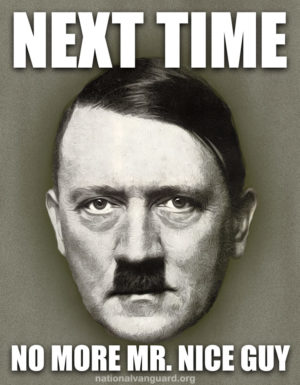 But were there part-Jews who were allowed to be in some responsible positions in the Third Reichâ€™s military establishment? Yes, there were â€“ though not at the highest levels, as one might infer from Mr. Martinbergâ€™s words. But at middle levels â€“ yes, it happened. In retrospect, this can be seen as excessively tolerant, and a mistake. Perhaps itâ€™s this kind of occasional softness toward apparently loyal part-Jews on the part of the German National Socialists that inspired the meme I first saw almost 40 years ago, and which still survives today, in which we see an image of Hitler with the words â€œNext time, no more Mr. Nice Guy.â€

I’ll merely mention, since they are so well-known, Hitler’s high regard for Great Britain and extreme disinclination to fight a war with her, and the great efforts he made to preserve peace with her.

As for pan-Aryanism, Hitlerâ€™s change in attitude from his earlier disparagement of Slavs and his focus on Germans only has been well-chronicled in James Hartingâ€™s excellent article â€œHitler and the Slavs in Historical Perspective,â€ which you can read on National Vanguard. In it, he says in part:

Contemporary National Socialists view Adolf Hitler as the symbolic leader of the whole of the Aryan race. I, personally, believe that this conception of Hitler is correct and I embrace it enthusiastically. In Mein Kampf and elsewhere, Hitler spoke repeatedly about the fundamental, trans-national unity of the Aryan race, and specifically about the pan-Aryan nature of the struggle against international Jewry.

. . . Increasingly as the War went on, Hitler found himself as theÂ de facto head of all of the Aryan peoples of Europe, and not just of the Germans or of the Germanics. Indeed, from the historical perspective that we now enjoy, we can see that despite being at war with Great Britain, it was Hitler who had the best long term interests of the British people at heart, and not the drunken Jewish catâ€™s paw Winston Churchill, who proved to be the true gravedigger of the British Empire.

By the end of the War, Hitler had come to realize that his historical role had expanded far beyond that of simply being the chancellor of the German Reich. In his Political Testament, written immediately before his death, he spoke of himself in the role of the defender of the â€œEuropean children of the Aryan nations.â€

In Ukraine and in Russia, and throughout much of eastern Europe, Hitlerâ€™s Germany was able not only to garner support, but to raise actual armies to fight for National Socialismâ€™s New Order, despite whatever historical conflicts had existed previously between Slavic and Germanic peoples, and despite the fact that those conflicts left more than a trace in Hitlerâ€™s early thinking and in Mein Kampf itself â€“ and despite the fact that a war was on, with all the near-inevitable cruelties on both sides that that implies, and despite even the fact that some of Hitlerâ€™s subordinates still evidently harbored, and acted on, anti-Slavic sentiments.

That seems almost incredible, but it is true. I believe it is an example of mythopoeic power at work — the mythopoeic power of Hitler’s and Germany’s titanic struggle against the forces of evil — evil that eastern Europeans knew only too well. And I further believe that that mythopoeic power is still alive — and growing — and that we can and must harness it as part of our efforts to awaken, inspire, and organize our people. Germany’s and Hitler’s unparalleled efforts for our race — and their ultimate immolation and sacrifice for that sacred cause — are the stuff of which myths and legends are made, the stuff of which new faiths are made, faiths that can inspire men to great and heroic deeds — not just for the duration of a war — not just for a single lifetime — but for millennia. I believe this mythopoeic power, along with the deep insights of Cosmotheism, can combine to bring into being a spiritual revolution in the hearts and minds of our people — exactly what is needed so that we will be able toÂ do what must be done.

There is available online a very good film — miniseries, really; it is many hours long — chronicling the life and world-historical struggle of Adolf Hitler. It is entitled The Greatest Story Never Told. It is close to being objective — and cold-hearted indeed is the man or woman who can see it without first weeping, then rising in spirit to inspired action.

Something of the spiritual essence of the final Earthly days of the man to whom Yockey simply referred as The Hero of the Second World War comes through in this extract from Savitri Devi:

Calmer now, amid the thunder of explosions and the noise of crumbling buildings â€” the flames and ruins of the Second World War â€” than then, at the top of the Freienberg, under the stars; freed from the temporary wild despair that had seized him at the news of the Russian advance west of the Oder River, Adolf Hitler beheld the future. And that future â€” his own and that of National Socialism and that of Germany, which had now become, forever, the fortress of the new faith â€” was nothing less than eternity; the eternity of truth, more unshakable (and more soothing) in its majesty even than that of the Milky Way.

In spite of all, National Socialism, the modern expression of cosmic truth, would endure and conquer.

National Socialism would rise againÂ because it is true to cosmic realityÂ and because that which is true does not pass. Germanyâ€™sÂ via dolorosaÂ was indeed the way to coming glory. It had to be taken, if the privileged nation was to fulfill her mission absolutely, i.e., if she was to be the nation that died for the sake of the highest human race, which she embodied, and that would rise again to take the lead of those surviving Aryans who are â€” at last! â€” to understand her message of life and to carry it with them into the splendor of the dawning Golden Age.

As I said in my series “A New Religion for Us”:

From the life of Siddhartha Gautama to the beginnings of modern organized Buddhism, centuries passed. Three hundred years elapsed between the first stories of Jesus and the founding of Christianity. From the Mycenaean origins of the Eleusinian Mysteries to the Greek celebration of them there passed nearly a thousand years. Adolf Hitler died just eleven years before I was born. We are just at the beginning.

Mythopoeia is that which makes legends. Tolkien’s great world-spinning works of fantasy are called mythopoeic. Tolkien himself wrote of the power of legendary figures in the lives and the hearts of men in a poem he once wrote:

Blessed are the legend-makers with their rhyme
of things not found within recorded time.
Such isles they saw afar, and ones more fair,
and those that hear them yet may yet beware.
They have seen Death and ultimate defeat,
and yet they would not in despair retreat,
but oft to victory have tuned the lyre
and kindled hearts with legendary fire.

Mythopoeia is not limited to fiction: I say that the “isles they saw afar” are the new world we will build, a world fit for Aryan man and Aryan woman to inhabit! And we all know who it was who saw “death and ultimate defeat,” and who nevertheless “would not in despair retreat” — and we also know who it is who must now to victory tune our lyres — and kindle hearts with legendary fire.

You’ve been listening to American Dissident Voices, the radio program of the National Alliance, founded by William Luther Pierce in 1970. This program is published every week at whitebiocentrism.com and nationalvanguard.org. Please write to us at National Alliance, Box 172, Laurel Bloomery, TN 37680 USA. We welcome your support, your inquiries, and your help in spreading our message of hope to our people.Â You can also help us by visiting natall.com/donate. Once again, that address is Box 172, Laurel Bloomery, TN 37680 USA. Until next week, this is Kevin Alfred Strom reminding you of the words of Richard Berkeley Cotten: Freedom is not free; free men are not equal; and equal men are not free.