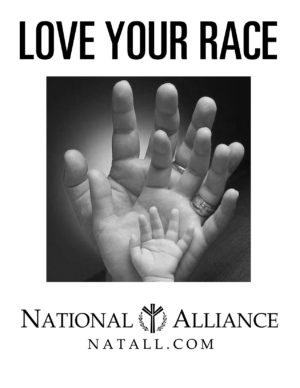 EVERY FEBRUARY 14th I do two things: First, I commemorate the anniversary of the horrific firebombing of Dresden, an act of terror and racial hatred against us — a true holocaust of innocent people, good people, our people. Second, I work to build among my fellow White men and women an awareness that we should love our race. For more than a decade, Valentine’s Day has been, to members of the National Alliance, the starting day of our “Love Your Race” campaign. Our love-your-race-themed fliers and promotional materials generate enthusiasm and a response of “where have you guys been all my life?” among perceptive, free-thinking Whites — and some real cognitive dissonance among the brainwashed lemmings. I’ve provided links in the text version of this broadcast for both color and black-and-white graphics, some for 8.5 by 11 sheets, some for banners or stickers, that you can have printed and distribute widely this month. Let’s work together and increase racial consciousness. Just click on the images for the full size versions.

The lemmings say “Why should we love our race?” they say; “That’s hate — to love your race!”

Why should we love our race? That’s a question that only White people ask.

Blacks don’t agonize over whether or not they should revel in and celebrate their Blackness. Nor do they wring their hands over whether or not it’s “moral” to support Black causes and Black candidates and Black businesses — and Black defendants and Black victims. It didn’t matter to them that Michael Brown was a thug and a thief and a drug-crazed aggressive lunatic: the only thing that mattered was that he was Black and that a White man killed him. Blacks have racial loyalty.

Mestizos — same story: They don’t hesitate for a microsecond to unite racially, whether in La Raza, ethnic gangs, or countless other race-based groups. They demand their “fair share” of the country they’re illegally invading, our laws be damned, and openly call for Mestizo “reconquista” of a third of the contiguous United States. Nowhere in their literature or media do you see them asking themselves if it might be “morally wrong” for them to stand together and fight for their interests. Nowhere do they question whether or not they exist as a people. Those things are all a given; built into their consciousness, their mentality. They don’t pathetically whine over whether or not they’re being “fair” to other groups when they stand up for their own. Mestizos have racial loyalty.

Though it was not always so, most Whites today lack racial loyalty. (Back in the days when we still had our own country and our own leadership, the lemmings followed the examples of better men than they, men who were members of their own race. Today, our “leadership” consists of the enemies of our race and their employees.)

Among the other races, even the veriest savage knows loyalty to his race, and practices it. The extent to which non-Whites have organized themselves along racial lines is impressive. A glance at the endless “Hispanic,” Black, and Jewish organizations that you can find listed in the Encyclopedia of Associations or in a simple Google search would be a good start. There are hundreds upon hundreds of them. Where are the White analogues? Even in countries where Whites are a minority, and where one would think the same kind of self-interest that provokes other minorities to close ranks would be operative, they are few in number.

Another area where we Whites are lacking is in our misplaced altruism, which even before the age of Jewish media dominance was out of control and being directed to inappropriate objects, much to the detriment of our own people. We see this every day when we see White couples spending their wealth and their precious irreplaceable lives raising imported non-White children — or supporting Third-World-focused charities.

Related to this problem is our gullibility as a race: We will believe almost any kind of magical-mystical hokum which stimulates our emotions, our imaginations, or our childhood memories. Reveling in such feelings, reveling in creative imagination and fantasy, probably a mental necessity for us, is the job of Art — and harnessing these feelings ought to be the job of a future race-based religion; but today we allow ourselves by the millions to be the marks for any halfway clever con man who tells us he represents the “Old Time Religion” and “scripture” or “New Age Consciousness” and “beings” channeled from other worlds or centuries past — or any of hundreds of variations on the theme. As someone once said, there’s a seeker born every minute and the mother lode of seekers and suckers is to be found among White people, whose high intelligence and productivity makes them wealthy enough — and whose childish naivetÃ© makes them gullible enough — to be the ideal victims of the Holy Class.

Another serious flaw is our obsessive focus on economics. Work hard, make stuff, get more stuff: That’s what life is all about, it seems. Working for money has become almost a religion in itself. Is there any limit to how much of our lives should be focused on providing the material needs and material whims of others? Is there any limit to how many fast food establishments and discount stores should be built? Leaving aside government-approved religions, is there any concern greater than one’s bank account or profit margin? Is there anything we should refrain from doing — or saying in deceptive emotion-triggering advertising — as long as it increases sales for our drug or widget? Apparently not. And if you think that I’m just criticizing the world of business, think again. No one is more obsessed with economics — with the making and distribution of products and the number of Federal Reserve trading stamps in one’s pocket — than the egalitarians, liberals, and Marxists. White people are so money-obsessed that very few of us step back and see that the whole so-called “political spectrum” is a sham, with both alleged “sides” mainly arguing over the method by which we shall slave for money and who shall get what share. Only a tiny percentage step back far enough to see that we live in a world of biological realities and that money is just a convenient fiction that ought to serve us — not the other way around.

And yet… and yet I still love my race. I love my people despite their shortcomings. I love them because they are my kind and I understand them — and some of them understand what I am saying today. We see the world in ways that no other people can see it. We show that special understanding in our art, written and visual. I feel that special understanding in the knowing wisdom of my elders, in the smiles and laughter and wonder and questioning of White children, the like of which is not to be seen elsewhere on Earth.

When we hear Beethoven’s Ninth Symphony or the haunting melody of a old folk song — that’s the White race.

When we see the magnificent buildings of Federal Washington or Imperial London or the Acropolis or Moscow or the Seven Hills of Rome — that’s the White race.

When we read of the exploits of Pythagoras or the Wright Brothers or Edison or Arthur Rudolph — that’s the White race.

When we read the words of Edgar Allan Poe or Lord Dunsany or John Dryden or Raymond Chandler — that’s the White race.

When we effortlessly download libraries-full of information with the click of a mouse — when we share our thoughts and ideas instantly across the oceans, connected by radio waves to the endless stream of ones and zeros that is the Internet, allÂ as we sit in our rooms made comfortable in the dead of Winter by invisible and silent machinery — that is the White race.

When we stand on the surface of another world and look back at the Earth — or when we send robots to other worlds to tell us what is there — that is the White race.

When we gaze into the microcosm of the cell and read the ancient code of the DNA that makes us what we are — that is the White race.

When we hear the children’s choir sing at Yuletide and are moved to tears by their soaring voices — that is the White race.

The greatest and most beautiful things of this Earth have been made by White people. We should love ourselves. We should love the Life Force that moves in us, and has made us what we are — a unique life stream like no other, and with a destiny that is ours alone.

In loving our race, we love that destiny also. For it is not just for ourselves as we are now — that we should be moved to love. What should move you to love is the realization that all these things that I have mentioned — the great works of art and of science and of knowledge — all these things are just the bare beginnings of something that is coming. The White race — great as it is, and there is none greater — has so far only managed to raise itself just an inch or two above the primeval slime of our beginnings. That is only the first step on an immense journey, a journey to the stars and beyond. So love your race — for what it is, and for what it is becoming.

It is not so much to preserve what we are now that we fight — though we must do that. It is the unwritten and unknown future, rich with infinite possibilities, that is at stake. It is the promise that is in us that must be kept, the promise of our children and our children’s children. The potential death of our race is a tragedy we must prevent because we would be killing something that has just begun; we would not even know what we were killing.

Nietzsche said that man is something that must be overcome. He meant that man did not overcome the beast in him, the beast that was his forebear, just to exist in perpetuity as he is. Man, European Man, is a bridge to something higher, something greater, something that our best thinkers and artists can only hint at now.

Love your race? Yes, despite everything, despite the flaws, despite the stupidity and immorality and shortsightedness, despite the seemingly successful assault of the Jewish Opponent, despite it all — Love Your Race. Everything depends on it. And nothing else matters.

You’ve been listening to American Dissident Voices, the radio program of the National Alliance, founded by William Luther Pierce in 1970. This program is published every week at whitebiocentrism.com and nationalvanguard.org. You can join and support us by visitingÂ natall.com — or write to National Alliance, Box 172, Laurel Bloomery, TN 37680 USA. We welcome your support, your inquiries, and your help in spreading our message of hope to our people. Once again, that address is Box 172, Laurel Bloomery, TN 37680 USA. Until next week, this is Kevin Alfred Strom reminding you to keep on thinking free.