I DON’T OBSESS over Web site statistics. I think it’s a good policy to follow National Alliance principles, and to do our best work at all times, and not be too concerned about “pleasing the audience” to get higher numbers. But I do check our readership statistics from time to time — both our own internal statistics and those provided by independent research firms like Alexa and SimilarWeb. And we’re doing even better than the last time I checked several months ago.

Nationalvanguard.org, with 351,000 site visits in the last month alone, has well over four times the audience of the Simon Wiesenthal Center, one of the leading Jewish pressure groups in this country, and which has an annual budget of $27,000,000.

Nationalvanguard.org now reaches over 60 per cent. of the online audience of a major state capital newspaper, West Virginia’s widely-read Charleston Gazette — which is well-known, by the way, for its biased reporting regarding the Alliance and our campus in the eastern mountains of that state.

Nationalvanguard.org’s online audience is now nearly half the size of that of the national Democratic party — democrats.org. (Yes, that’s the party that ran Hillary Clinton for president last year.)

We’re further behind Donald Trump’s party’s site — gop.com — but I still think it’s a damned impressive achievement for us to have almost a quarter of the readership of the site of America’s ruling political party, which has a sitting president in the White House. 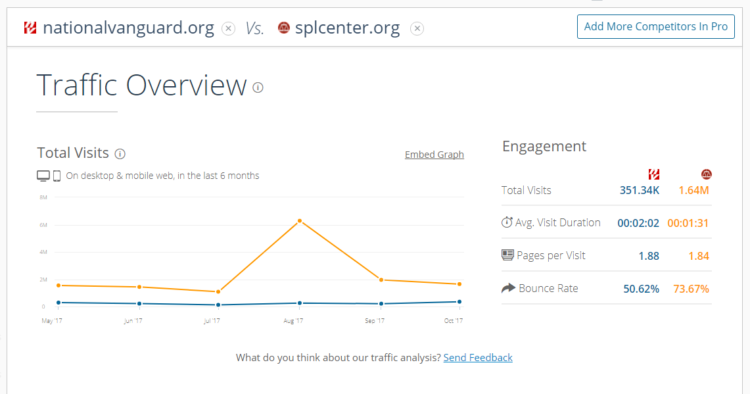 And it’s also rather impressive that we have, with a very small but dedicated staff and almost no budget, achieved about the same percentage of the online audience — approaching a quarter — of the vicious, mendacious, but extremely wealthy Southern Poverty Law Center and their ill-gotten quarter-billion-dollar war chest. That tells me that the truth and racial loyalty are powerful weapons, more powerful than we imagined before.

We’re doing even better than that compared to the Jewish “Anti-Defamation League,” with almost one-third of their audience numbers, despite their $61 million annual budget.

Now it’s true that some White advocacy sites have even higher rankings than ours (and more power to them; we need gateways to our hard truths) — but some of these sites are forums, and it is very hard for an online magazine, with its few high-value articles every day, to compete with a forum in terms of numbers, with the forum’s hundreds of daily posts and replies (most of them of only moderate to low value). But I am proud to say that nationalvanguard.org has now far surpassed the readership of the allegedly pro-White forum that seems to thrive on hostility to the Alliance and freakish posts from freakish trolls and admitted anti-White informants. It will remain nameless here!

There are a few “alt right” sites with higher rankings than ours, some comparable to the ADL’s in terms of readership. These sites are very famous in terms of media coverage and also have a wide-open “big tent” and “fluid principles” approach to gain numbers. That we can achieve a large fraction of those sites’ readership with our uncompromising racial thinking is a great testament to our staff and supporters — and the soundness of our founding principles.

A big thank you to all of you who have helped us get this far: to our donors, to those who help us behind the scenes, to our volunteer editors including Dissident Millennial, Rosemary Pennington, Chris Rossetti, Bradford Hanson, Dale Bennett, and others — you know who you are; and to the fine writers John I. Johnson, Andrew Hamilton, David Sims, and many others who allow their work to appear here; and to Vanessa Neubauer who produces so many fine audio books; and to Jay Hess and David Pringle and Laura Lee who make our growing and inspiring White community what it is; and to Sveta and Will Williams, without whom and without whose sacrifices none of this would be taking place — and who has battled and is battling for the National Alliance’s survival against malicious lawsuits, and winning — and who is preserving and building and expanding Dr. William Pierce’s research library into the finest racial research facility bar none: Thank you all.

IT IS a constant battle to fight Jewish censorship of our online commerce — and donations and sales of books and CDs are the lifeblood that keeps this site — and our main organizational site, and our church site — alive and kicking. Credit card processors, e-commerce software providers, and others are under relentless pressure to deny us services, and they have succumbed again and again. Every time, our overworked staff scrambles to find a replacement and in the meantime many of our incoming orders fail.

The situation is outrageous: Imagine if the power company — or your local bank — or your local grocery store — could refuse to do business with you if they didn’t like your political views. You couldn’t do business with anyone; you couldn’t stay warm in the Winter — or even eat — without reverting to an 18th-century lifestyle. You might die. And dying is exactly what the Jewish pressure groups would like to happen to us. Without the ability to get support from our readers and listeners, and sell our literature and CDs, the National Alliance would quickly die in our money-based economy. So far, banks and utility companies and food stores can’t get away with denial of service based on political views or Jewish pressure. In our increasingly online economy, it’s high time that platforms that serve public discourse and e-commerce be treated just like public utilities — and be forbidden from engaging in de-platforming White advocates like us. It’s high time for a coordinated legal effort to stop this disgusting Jewish-fomented political censorship. And it’s high time for Hatreon — a platform designed for the purpose of funding the very voices that the Jewish power structure is trying to stifle.

For the first time in American history, free speech entrepreneurs have organized with the explicit purpose of facilitating public support for Politically Incorrect activists, writers, producers, and other content creators. The name of the service is Hatreon — a humorous play on the name “Patreon,” a similar “crowdfunding” service but one infamous for censoring and de-platforming racially conscious Whites. The National Alliance has signed up for Hatreon, and you should too. The signup process is simple and only takes a minute, then just a few seconds more to set up a monthly pledge to support the National Alliance, our online news magazine National Vanguard, and this program, American Dissident Voices. It looks like this means of providing our lifeblood of financial support is going to be alive for a while. All you have to do is visit natall.com/give — and your help will make our continued work possible. Let’s make the list of patrons of the National Alliance grow and grow, and become one of the largest ones on the site. I know that, with your help, we can do that.

We’ve achieved — with a microscopically small staff consisting mostly of volunteers — with a pitifully small roster of big-hearted donors compared to our readership — an impact in the same league as major political organizations and media sites. Just think what we could do with some real, significant funding.

In the last two weeks alone, more than 220,262 of you read this site, nationalvanguard.org. You downloaded over 224.93 gigabytes of content, including radio shows like this one. You accessed more than 614,342 articles. In two weeks! If just ten per cent. of our readers were as hard-core and supportive as I think they ought to be — and that ten per cent. is 22,000 people — and if each one of those readers gave the minimum donation amount of $5 per month; that would amount to $110,000 per month, or $1,320,000 per year. If the average donation of that hard-core ten per cent. of our readers were upped to just the minimum amount — $20 — needed to get a subscription to our monthly print publication, the National Alliance BULLETIN, then the National Alliance could have an annual budget, totally debt-free, of $5,280,000.

Do you want the National Alliance intentional White community in West Virginia to prosper and be developed beyond your most optimistic dreams? Then get busy. Donate. Get all your friends to do so. Do you want the National Alliance and National Vanguard to be able to hire a real staff — instead of depending on just those few people willing to go broke for the cause — a staff to do professional-level marketing of our unique message and plan for a White future? Imagine what we could do. If you want that, we need your monetary help. This world, like it or not, is one in which anything worth doing needs funding — for staff, for development, for infrastructure maintenance and expansion, for legal protection, and for new, creative outreach projects.

Do you see what we’ve done with a close to zero budget? Do you see how we’ve made progress against the wealthiest and best-organized and most implacable enemies on the planet, with just our determination and a handful of supporters? Do you see how we’ve successfully fought off legal attacks and kept on expanding? How much more could be done if you — the hard-core ten per cent. of our readers — gave us just that small amount of money every month, less than half of what it takes to pay your cable bill to the Jews? Five million is just a penny compared to the budgets of our enemies and the alphabet agencies they have corrupted. But it would immeasurably expand our capabilities and protect us from the assaults that are sure to come.

Please, everyone who hears my voice right now, support us on this new platform by making a monthly pledge today. Just visit natall.com/give to donate via Hatreon, and begin a whole new phase of our people’s renaissance — today.

You’ve been listening to American Dissident Voices, the radio program of the National Alliance. You can listen to our 24/7 radio network at natall.com/radio and read our online magazine, National Vanguard, at nationalvanguard.org. To help us, send donations to National Alliance, Box 172, Laurel Bloomery, TN 37680 USA. That’s Box 172, Laurel Bloomery, TN 37680 USA. You can also donate by accessing natall.com/give. Until next week, this is Kevin Alfred Strom reminding you to never give up.