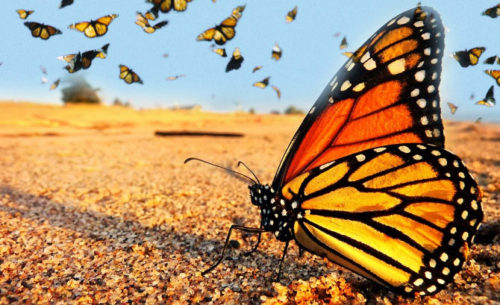 THE VAST JOURNEY of the Monarch butterfly is one of the most mysterious — and awe-inspiring — facets of Nature. We are far, far from understanding it. These delicate creatures — just four inches across — have bodies narrower than a snippet of the smallest twine, parchment-thin wings with patterns like stained glass of orange and amber, and five of them together do not quite weigh an ounce. They have brains little larger than a grain of salt. Yet within those brains are genetically-implanted instructions that send these creatures on a multi-generational journey of immense proportions and mysterious dimensions — a journey that we didn’t even know about until 1975.

The first generation of Monarchs is born in the Spring, goes through its larval stages on the ever-diminishing stands of milkweed in North America, then emerges from its cocoon, lives for a few weeks during which it mates, lays its eggs, and dies. As it does so, it inches north a few miles. The second generation follows the same pattern, living just a few weeks and moving a little more northward. The third generation does exactly the same thing.

But from the eggs laid by the third generation, usually in southern Canada or the northern US, the northernmost point of the creature’s range, arises the fourth generation. And the fourth generation is different. We do not know precisely how it is different, or why it is different, or how it knows it is different, but the fourth generation is always different — profoundly so. The fourth generation, though to our eyes and even to our scientific instruments looking exactly the same as those which preceded it, does not die in two to four weeks, as all the other generations do. It lives for up to nine months — ten times as long. It does not inch northward a few miles. Instead it sweeps out of the north and across an entire continent, three thousand miles and more, travelling up to 100 miles a day in a months-long vast and perilous journey to the high mountains of Mexico and southern California, where it congregates with its fellows, covering the forest in its millions and weighing down the branches in its hundreds. And, in the moist and temperate air of these long-secret sanctuaries, it waits.

When something inside them hears the silent signal of approaching Spring, the fourth generation takes flight again. Northward, ever northward, they fly — from sanctuaries they found but had never seen before, to breeding grounds that only their great-grandparents knew. And there they alight, dance their mating dance, and lay the eggs for a new generation one — and thus the ancient cycle begins once more.

The First Generation of man consisted of, as William Pierce put it, the “first race of men [who] held themselves apart from the races of sub-men around them and bred only with their own kind.” Only thus, only by racial separation, only by leaving behind the more primitive races around them, could the earliest true men take the first faltering steps up the ladder which led to Pythagoras, Phidias, Darwin, Crick, and Watson. When they made this choice to leave the more primitive races around them behind, it was the right choice — but it was also an unconscious choice, an instinctive choice, a choice made by the soul more than by the mind: A choice of beauty over ugliness, intelligence over stupidity, grace over clumsiness, refinement over crudity, future greatness over decline, degradation, and extinction. This ability to distinguish — and instinctive revulsion against — the base and the ugly and the primitive, in both individuals and races, still persists in our souls today. Our enemies call it “hate” and “racism” and wish it could be abolished — but it is really one of our greatest and noblest traits, if we understand it rightly. And it is necessary; all forward progress depends on it. Survival itself depends on it. Abolishing it is the same as abolishing us. And so, with the First Generation of man, we left the sub-men behind us, we separated ourselves, and inched forward and upward.

The Second Generation of man, his understanding growing along with his frontal lobes, learned to make tools and domesticate plants and animals. He built cities and roads and canals and aqueducts. He invented agriculture. The most important consequence of these things was that some men were now freed from the immediate necessity of spending all their time trying to fill their bellies and keep themselves from getting killed. And a small subset of these men spent their hard-won free time not in leisure, but in deepest thought. They observed the heavens and the patterns and motions of the stars and planets. They learned the rudiments of engineering. They created religions and philosophies, some of which were honest and deeply penetrating advances in our understanding of the Universe. Again, they inched forward and upward, sometimes falling back but eventually setting the stage for the next Generation.

The Third Generation of man developed the most powerful tool ever discovered, which was a tool not of stone or of steel, but a tool primarily of the mind: the scientific method. Using that tool, they plumbed the mysteries of time and space — came to understand numbers, mathematics, and geometry; built Stonehenge and other astronomical observatories, and eventually saw that the Earth is a planet among other planets circling a star amid millions of stars. Their inventions fill our homes, our laboratories, and our encyclopedias. The Third Generation took to the air, mastered electromagnetism, and — most importantly — learned the science of biology, thus preparing the way for the Fourth Generation.

The Fourth Generation of man is our generation. Its first men were Darwin, Galton, Nietzsche, Hitler, and Pierce. The Fourth Generation understands that neither man nor Life nor the Universe itself are static, but are ever-changing, ever-evolving. The Fourth Generation knows that neither our race as it is now, nor even the best of current human societies are ends in themselves, but are merely way stations and means to reach something infinitely higher. Standing on the shoulders of the greatest men of the past, the Fourth Generation now has in its possession the awareness and the knowledge — and, if we will but grasp it, the power — to direct its own future evolution, and no greater revolutionary force has ever existed on Earth.

Throughout the ages of the first three Generations and into our own, the human races evolved and diverged as they always have. New races emerged, and some became higher, some much higher, and some stagnated or devolved or became parasitic. Some went extinct. The abandonment of the sub-men in the First Generation was not a final act of separation. It was necessary, but not sufficient in itself. Racial separation is an act which has repeated itself, and will continue to repeat itself, almost infinitely throughout the history of biological evolution. Without racial divergence and separation, evolution itself — and hence life itself — is impossible. Man is no exception to this rule.

Most notable in the passage of these Generations is that the advancement represented by each succeeding stage was increasingly the province of one particular race, the European or White race. Equally apparent is the almost total non-participation of the lowest races, the Negroid and Australoid, in these advances. One mission of the Fourth Generation is total biological separation of the highest race of man — the race from which sprang the Fourth Generation, and from which Higher Man will himself spring — from all other races, lest it be brought down and lose its soul, its intelligence, its beauty, and its destiny.

Like the fourth generation of the Monarch butterfly, we too must now set out on our Vast Journey, and go where prior generations have never gone before. There is much danger and much we do not know as we set out together — but we do know this: Our journey will be a journey to the stars — a journey to transcend the Earth; and it will be a journey toward Higher Man — a journey to transcend ourselves. And we also know this: The hard-won knowledge and the methods of science bequeathed to us by prior generations will help us to find our way in unknown lands — and the truths that are written deep within our souls will guide us ever closer to our destiny, ever closer to God, ever closer to what must be.

The National Alliance is the embodiment of the Fourth Generation of man. The National Alliance is something never seen before in this world. The men and women of the National Alliance are dedicated to ensuring that our race’s Vast Journey shall continue eternally until we reach our undreamed-of destination; dedicated to ensuring that our Journey shall not end in death as our enemies intend, but that we shall instead ascend forever to new heights of greatness, of knowledge, of power, of beauty, and of wisdom never known before. And it is our mission to create a new and healthy State for a new and healthy people, and the purpose of that State will be the fulfillment of our mission.

In the deepest part of your soul, White man, White woman, White father, White son, White mother, White daughter — you know that I am right. You know that pursuing what is great and wise and noble and beautiful in our actions and, what is even more important, in the future evolution of our kind is the purpose of our lives. You know that there is nothing more important than the survival and advancement of our race. You know that everything we value, everything we care about, every hope for our children, every dream for the future, will die if our race dies. And you know that — if things continue as they are going in this society — our race will die. You know the changes that have to be made. Join with those who are determined that they shall be made. Join with the growing hundreds who know this truth and are acting on it. Join the National Alliance.

You’ve been listening to American Dissident Voices, the radio program of the National Alliance. I want to send each of you our beautiful, full-color illustrated booklet explaining the purpose of the Alliance and of this program. It is entitled Building a New White World, and, I assure you, you have never seen its like before. To receive your copy of Building a New White World, simply visit natall.com/booklet or send $3 to National Alliance, Box 172, Laurel Bloomery, TN 37680 USA. Once again, that address is Box 172, Laurel Bloomery, TN 37680 USA. We’re on the air every week — and our news site is updated many times every day — at nationalvanguard.org. We also have a forum where you can meet, talk, learn, and share with others — whitebiocentrism.com. Until next week, this is Kevin Alfred Strom reminding you to keep on thinking free.