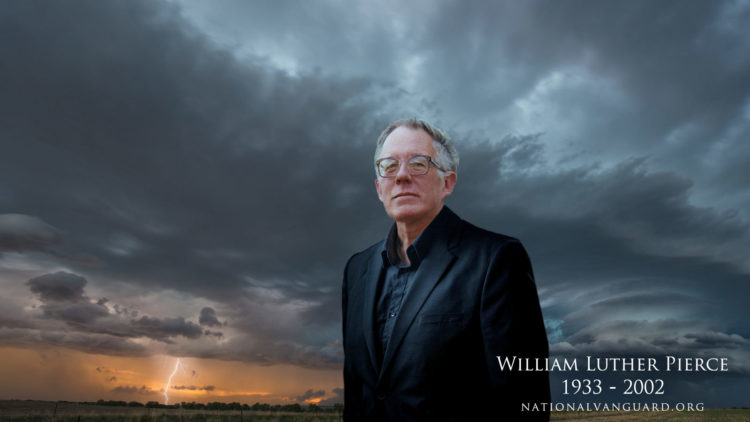 TOMORROW it will be fifteen years since the death of Dr. William L. Pierce, the founder and first Chairman of the National Alliance. With every year that passes it becomes clearer and clearer to me that Dr. Pierce was a prophet. Not a prophet in the hackneyed, phony sense of the ones in the Jews’ superstitious, genocidal, and very earthbound Torah — but a prophet who brings to us a new way of seeing the world more clearly and accurately than we have ever done before; a man who ranks with Pythagoras, Darwin, Shaw, and Nietzsche; a man who breaks us free of the irrational anti-Nature Abrahamic religions and their ever-intensifying death spiral that threatens to immolate the world; a man who brings to us a new morality that is worthy of our ancestors and ourselves if only we can be worthy of it — a morality that can ensure that we will have descendants who will survive to walk upon new and even greater worlds than this one; who brings us a new purpose in life, which has been the missing ingredient that we need to restore our lost hope, raise us up above petty materialism and individualism, and set us on a course of greatness beyond imagining, a one purpose that alone can bring us the fulfillment we have been missing; who shows us the way to bring forth a new people never seen before in this Universe.

There is no greater or more joyful task that we can set for ourselves than to make his words and his ideas the possession of every single man and woman and child of European descent on this planet — the practical, day-to-day work that gets his books and his broadcasts and his National Alliance program into the hands of more and more people, through the printed word, through the Internet, through radio broadcasts and audio books, and through that most valuable medium of all, the face-to-face spoken word of honest folks who know in their hearts that we are right, who know that without our moral and intellectual and spiritual force, united as one with all the power we can muster, all may be lost; but with unity and uncompromising, unrelenting effort we have a world — nay, a Universe — to gain.

What are some of the practical things that the men and women of the National Alliance are doing?

We’re rebuilding the book and CD catalog of National Alliance books. Today, in fact, I’ll be remastering several speeches of Dr. Pierce for better quality and combining them into the sixth CD of his speeches and broadcasts — 120 and counting — we’ve produced so far. Rosemary Pennington just pressed the “publish” button for our 4,300th article on nationalvanguard.org. Will Williams and team of volunteers are combining Dr. Pierce’s library (with hundreds of his original notes and cross-references) with several other massive racialist libraries that have been donated, into the best racialist research library I know of. Other National Alliance volunteers have fought against book pirates and Jewish contract-violators and are helping us retake our rightful place as the one legitimate source for the works of William Pierce and other authors published by the National Alliance. We’ve set up a 24/7 online radio network, with an ever-growing program list. We’ve taken the shattered remains of defunct Web sites and garnered nearly a quarter million visitors per month. Last month we served up a million and a third pages. We’ve published thousands of illustrated articles, nearly 200 radio programs, seven CDs with more in the works, and Vanessa Neubauer is presently releasing two large, important audio book projects. We’re preserving and archiving recordings and written works that have never been digitized before.

A new facility is being built to house the libraries. I just recently finished digitizing several historic speeches from the early days of the National Alliance, Vanessa Neubauer records several new audio book chapters almost every week in her projects both for the Alliance and the American Mercury, David Pringle (who just did a mass mailing of Alliance literature to a targeted mailing list) is, along with his wife, building our intentional White community on The Land and making it more self-sufficient; Will Williams and his wife Svetlana just published the 31st continuous and on-time issue of our print National Alliance BULLETIN (which I believe is the longest-lived American racialist publication bar none) and every day keep the wheels turning and the power on and the word getting out, and keep the quasi-legal persecutors and liars at bay, a huge and taxing job. And the others — including helpers, volunteers, and benefactors who wouldn’t want their names mentioned here — are giving their all to bring the new world we can see in our souls into being.

And now I want to make a special announcement of a very important project — a milestone that honors the life and work of Dr. Pierce. A project that will fascinate and engage all who hear it — and which can bring them, no matter where they are right now, into an understanding of our race’s struggle for existence and the infinite potential that awaits us if only we do What Must Be Done.

Thanks to Bradford L. Huie ofÂ The American Mercury a new audio book based on the life of Dr. Pierce is now being issued, read by Vanessa Neubauer. It’s an audio version of Robert S. Griffin’s The Fame of a Dead Man’s Deeds, and not only is it the only authorized audio version of this deeply moving biography of one of the greatest men of the 20th century, it is also aÂ new edition, containing the author’s latest revisions. Thanks to the efforts and cooperation of Miss Neubauer, Mr. Huie, and the management of the Mercury, we’ll also be releasing the first installment of this new audio book onÂ National Vanguard tomorrow, the 15th anniversary of Dr. Pierce’s untimely death. Here’s what Mr. Huie had to say about this release:

Today we begin one of the most important audio book series of our new century — one which we believe will become more and more relevant as the century matures: Vanessa Neubauer’s reading of Professor Robert S. Griffin’s masterful biography of Dr. William Luther Pierce,Â The Fame of a Dead Man’s Deeds. This audio book will be published in weekly chapter installments onÂ The American Mercury and will be available from the MercuryÂ as a full-length audio book when the series is completed.

It was fifteen years ago [this week] that William Pierce died at the age of 68. A physicist by training, he was known as a White nationalist (founder of the National Alliance), novelist (author of the radical revolutionary novelsÂ The Turner Diaries andÂ Hunter), editor and writer (the founder and first editor ofÂ National Vanguard magazine and author ofÂ Who We Are, a comprehensive history of European Man), and, perhaps most importantly, founder of a new religion which he calledÂ Cosmotheism.

In his final year of life, Dr. Pierce allowed Professor Robert S. Griffin of the University of Vermont — a man who was at the time in no way associated with Dr. Pierce’s activism, views, or philosophy — to live with him for an entire month, allowing Mr. Griffin to interview him at length, experience his daily tasks running the affairs of the National Alliance and producing his weekly radio show, meeting his co-workers, and giving him unprecedented access to almost every aspect of his life, something never done by any other journalist before.

The result was Professor Griffin’s bookÂ The Fame of a Dead Man’s Deeds, which was published inÂ 2001. The book’s title was taken from Dr. Pierce’s favorite quote, an ancient Norse proverb that runs as follows: “Cattle die and kinsmen die, and so must one die oneself. But I know one thing that never dies: the fame of a dead man’s deeds.”Â Fame, as I and many others called the book for short, was perhaps the first Internet-published book to “go viral” and hit the bestseller lists. It’s an extraordinary portrait of an extraordinary man. Robert Griffin is also an extraordinary man; gifted and sensitive, insightful and observant, an interviewer with the talent of asking the most pointed and germane questions — and a writer with the rare skill of capturing the true essence, personality, and even soul of his subject.

Beginning as a skeptic toward Dr. Pierce’s views, Professor Griffin saidÂ “Pierce cooperated fully and never once asked me to delete or change a thing.” By the time his sojourn had ended on the wooded, mountainous Whites-only retreat in West Virginia that Pierce called “The Land,” Griffin was able to sayÂ “I found him the most fascinating human being I’ve ever been around my life. . . . He is a very honorable man of the highest character.”

This audio book is the only one authorized by the author, and incorporates Professor Griffin’s very latest revisions, which have not yet appeared in any print edition.

How did a teacher, a professor, a research physicist like William Pierce come to conclude that there is no more important — and no more moral — thing than ensuring the survival of the European race? Why did he reject the equalizing, leveling, democratic trends that have dominated the West for a hundred years or more? Why did he ultimately decide that Christianity was an aberration and a spiritual sickness, unworthy of Â being the dominant religion of the West? Well, hit the play button and you’re about to find out, as you embark upon a journey of the mind and soul, and learn what Professor Griffin learned during William Pierce’s last year on Earth. Your life will never be the same.

Thanks to the kind permission of Miss Neubauer and The American Mercury,Â we will begin this audio book series tomorrow, July 23, with the Introduction toÂ The Fame of a Dead Man’s Deeds. Keep your eye on nationalvanguard.org tomorrow and every week thereafter for this very excellent presentation.

Be with us tomorrow, and next week, for more information that the controlled media don’t want you to hearÂ — for more true education than you’ve ever before experienced in your life, right here onÂ American Dissident Voices.

You’ve been listening to American Dissident Voices, the radio program of the National Alliance. The National Alliance is working to educate White men and women around the world as to the nature of the reality we must face — and organizing our people to ensure our survival and advancement. To help us, send donations to National Alliance, Box 172, Laurel Bloomery, TN 37680 USA or visit natall.com/donate. To order books and CDs from National Alliance books, visit natall.com/shopÂ and for free fliers to spread the truth in your community, visit natall.com/fliers. Once again, our postal address is Box 172, Laurel Bloomery, TN 37680 USA. Until next week, this is Kevin Alfred Strom reminding you of the words of Richard Berkeley Cotten: Freedom is not free; free men are not equal; and equal men are not free.