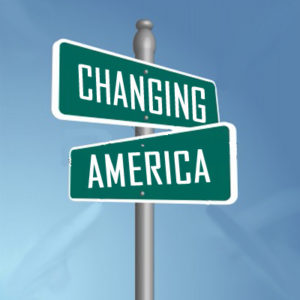 WE SEE a changing America, an America that is changing for the worse. An America that is getting darker, more dangerous, more corrupt, more degenerate, and sicker with each passing year. We see an America that is no longer fit for our children to live in, an America in which our grandchildren may not even have a future. Dr. William Pierce, the founder of the organization behind this program, the National Alliance, saw these changes too — and developed a plan to save our race and make our children’s future brighter and greater than we ever imagined before.

Today we’re going to hear Dr. Pierce explain how and why the Alliance must have a voice that can be heard by every member of our people.

I give you Dr. William Pierce and Changing America, part 2:

We’re striving always to speak with a louder and louder voice, a more and more authoritative voice. We’re building a multi-media communications capability. We began with leaflets and pamphlets and tabloids back in the 1970s. We sold our tabloids in news racks in Washington, and distributed our leaflets on street corners. Then we began publishing books and distributing books from other publishers. We also began publishing magazines. In the early 1990s we began our American Dissident Voices broadcasts, first on shortwave radio stations and then on commercial AM and FM stations. Then we began using the Internet, and made a large amount of information available through the World Wide Web including the texts and the audio recordings of our weekly radio broadcasts.

Now that we are using all of these media, our task is to continue to develop our ability to use them more and more effectively and on a larger and larger scale. That is, we want to deliver our message to the public as persuasively as we can; we want to make the best impression, the strongest impression we can. And we want to reach more and more people.

Eventually, we want to be speaking continually to every White man and woman in every walk of life and of every ideological persuasion, whether he wants to hear us or not. We know that even those Whites who have been taught by the controlled media to hate and fear us, even those who have been brainwashed into hating their own race and feeling guilty for being White, eventually can be won back for our race. But that won’t happen overnight.

Of course, we also use the media controlled by the enemies of our people as much as we can, sometimes through radio or television or newspaper interviews, but more often through their reporting of our activities. All of this reporting is intensely hostile and is quite distorted, however, and although it increases the public’s familiarity with our name it can hardly take the place of our own presentation of our facts and ideas and policies to the public through our own media.

Building our communications infrastructure is a big job and it requires the participation and support of many people. And so we also have an organizational task: We must recruit men and women who can staff our infrastructure and make it functional; we must recruit others who can provide the financial support and other necessary help. All of this requires an ongoing recruiting effort.

Our aim is not just to inform people but also to motivate them to participate in our effort in one way or another — some by contributing money or other resources, some by utilizing their skills or talents to help us with the formulation and propagation of our message, whether as researchers or writers or editors or technicians; and some to do the other tasks necessary for us to continue building a strong and effective organization.

And although the main function of our organization now is communication with the public, in the future we need to develop other functions. Every facet of the society around us has become corrupted. It’s not just the controlled news and entertainment media with which we need to compete effectively. The public schools and the universities have been corrupted and turned against our people. The same is true of virtually every mainstream Christian church, and of course there is the government with its courts, its legislators, and virtually the whole bureaucracy, along with the police and military branches. The professional organizations — associations of lawyers, physicians, engineers, professors, teachers, as well as the labor and trade unions — also have been infiltrated and subverted and are marching in ideological lockstep with the controlled media, at least on the essential issue of race.

All of these institutions have been damaged to the point where it’s not just a matter of making new rules and replacing a few personnel in order to make them once more constructive and progressive components of our society — some of them will need to be rebuilt from the ground up. Many people who are involved in these corrupt institutions, many members of these corrupt associations, are aware of the corruption and would like to fight it — but by themselves can’t do much. We want to recruit these people, and in order to do that effectively we must do it as insiders, not outsiders. We need lawyers to recruit lawyers, teachers to recruit teachers, soldiers to recruit soldiers, policemen to recruit policemen, professors to recruit professors.

This really requires a ramified organization in which many of the capabilities and functions of the larger society are duplicated on a smaller scale inside the organization. This is a very important feature of the National Alliance and one that distinguishes it sharply from any other organization which claims to be working for the survival and progress of our people. We’re not trying to build a mass organization with a membership consisting primarily of disgruntled or dispossessed White people who have a personal grievance. We want the people who — despite affirmative action and massive non-White immigration and special quotas for non-Whites — still are successful and productive people, people who have been able to succeed despite all of the obstacles put in their way.

We need men and women with the strength of character and the intelligence and the self-respect to get ahead in their chosen fields of endeavor regardless of the circumstances. We’re building an organization of winners, not losers. We understand two essential things about the nature of our task. The first thing is that the time has passed when one could make a successful revolution by gathering a howling mob outside the city gates. The people inside the gates have too great an advantage. The only way to make a revolution in this technological era is from inside the gates. If our aim is to gain control of the machinery of power, then we must recruit people who already are part of the machinery. We need the technicians and the engineers and the scientists; we need the programmers and the system administrators; we need the professors and the military officers and the police officials; we need the writers and the editors and the newspaper reporters and the lawyers. We need at least some of the people who already have their hands on the levers of power, people who can throw open the gates at the right moment.

The second thing we understand — and this is a repetition of what I said just a few minutes ago — the second thing is that as long as the enemies of our people control the mass media, as long as they control Hollywood and the television networks and Madison Avenue, a majority of our people will continue to dance to whatever tune the Jews are playing. They will believe whatever they are told they should believe, and will vote accordingly whether the economy is bad or good. That’s why it is folly to attempt to save our people through the present system of electoral democracy. It makes no sense at all to attempt to build a third party or to capture the Republican or the Democratic party until we have TV and Hollywood in our own hands or have in some way made it impossible for the Jews to continue using these mass media for their own purposes.

We cannot now illuminate or motivate most of our people, we cannot win the hearts and minds of the couch potatoes, of the lemmings, of those who are authoritarian by nature. We can persuade only the minority of our people who are capable of thinking independently, the minority not under the spell of television. That’s somewhere between 2 and 5 per cent. of the population, not enough to win an election or to form a mob capable of overwhelming the government — but definitely enough to throw open the city gates at the right moment. That’s why we put so much of our effort into communicating effectively with those able to listen to us and why we aim for the most intelligent, the most capable, and the strongest people — the winners rather than the losers who traditionally are the targets of a revolutionary movement.

One thing we always must keep in mind in this regard is that despite the fact that a majority of our people are under the influence of the propaganda of our enemies at the moment, most of them are not really bad people. Relatively few White people are consciously evil; relatively few make a conscious decision to betray their own people for personal gain. Most are morally neutral people. They are lemmings, and what they need is good leadership and proper guidance. No matter how hostile to us they may seem now when they have been filled with racial guilt and racial self-hatred and hatred against us by the controlled media, they will quickly forget this guilt and hatred and they will develop healthy attitudes and opinions after the media have been taken away from the hate-mongers.

That’s why we never count our enemies, only our friends. And the number of the latter is growing all the time, more and more with each passing day.

As I said, the tasks that all of us in the National Alliance have set for ourselves are, first, to build a communications infrastructure giving us the capability of reaching the perceptive and responsible few of our people now — and eventually reaching all of our people as we become able to compete effectively with television and the other mass media under Jewish control; and second, to recruit the best of the people we reach with our message, to bring them into the National Alliance and organize them into an effective force for change.

We are of course still a long way from being able to implement any of the changes that we want. We don’t even know whether we will be able to change things peacefully by winning the hearts and minds of a sufficient number of people in positions where they’re able to help us transform America’s laws and institutions in healthy and constructive ways, or whether the degenerative forces now destroying America will plunge us all into chaos first, and we’ll have to try to build an entirely new society on the ruins of the old.

We have been presenting Dr. William Pierce, the founder of the National Alliance, with his Changing America, part 2. Next week we’ll conclude this important address — as Dr. Pierce moves and inspires us with his vision of the America we want to build — the White America that, with your help, we will bring into existence.